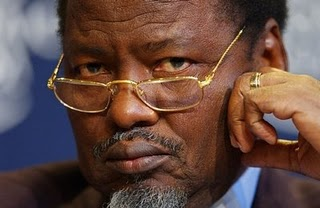 "Support of Nature is with us. For what do we need this support of Nature, this coherence, this Unified Field? We   want it to keep peace in the world.

We have been fighting for freedom and peace, and we want peace in order to develop our country and to develop the world.

We need the support of Nature to keep peace in the world.”

“Mozambique has  unexpectedly  emerged  as a candidate for an African  success.  story (…….). A ruthless  drought (……) has been broken  by  quenching  rains  and  the  country  is  carpeted  with  corn.  “We’ve  got  a   combination  of   peace   and  rain,  which   there hasn’t been in Mozambique  for a quarter  of a century,” marveled Arthur M. Hussey III, coordinator of relief deliveries for CARE. “

“Seven years after the guns fell silent,  jackhammers are ringing, new hotels are rising, schools are opening, and newly paved roads are rolling across the land.

The war-torn, once ravaged  countryside is now lush with corn, cashews and mangoes. Inflation has dropped  to 2%, from 70% in 1994. The economy has grown an average of 10% a year since  1996. After years of relying on donated food, Mozambique now grows nearly
enough to feed itself. Once a symbol of Africa's calamitous wars, Mozambique is now a success story."