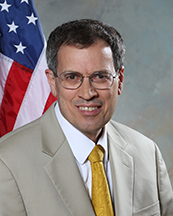 Member of the Board of Directors

David R. Leffler received his Ph.D. from The Union Institute & University in Cincinnati, Ohio where he did his doctoral research on the topic of Invincible Military Defense. His other academic degrees include: a B.A. in Education and an M.A. in the Science of Creative Intelligence from Maharishi University of Management in Fairfield, Iowa and an M.M. in Education from New Mexico State University at Las Cruces. David was a member of the U.S. Air Force for nearly nine years.

Dr. Leffler served on the Board of Editors for the Journal of Management & Social Sciences (JMSS) published by the Institute of Business & Technology BIZTEK in Pakistan. David served as an Associate of the Proteus Management Group at the Center for Strategic Leadership, US Army War College and is a member of the U.S. Naval Institute. Proteus published an appendix about Invincible Defence Technology entitled "An Overlooked, Proven Solution to Terrorism" that appears in "55 Trends Now Shaping the Future of Terrorism."

Articles by Dr. Leffler or about him and Invincible Defense Technology have been featured in nearly 1,000 locations worldwide. Most are available online by clicking here.

Dr. Leffler presented a paper about Invincible Defense Technology at the Korea Institute for Defense Analyses, and at the International Sociological Association Research Committee 01 Seoul National University & Korea Military Academy International Conference on Armed Forces & Conflict Resolution in a Globalized World. He spoke at the "5th Annual Countering IEDs - Assessing the IED Threat and its Evolution on the Battlefield and in the Homeland" conference in the Washington, DC. The title of his briefing was "Invincible Defense Technology (IDT) as a Means to Prevent the Implementation of IEDs."

David has also given presentations about Invincible Defense Technology at the Russian Air Force Academy, The Russian Academy of Sciences, and defense-related institutions in the United States such as the Institute of Defense and Business. Invincible Defense Technology News is edited by Dr. Leffler. He is a founding member of CAMS and a certified teacher of the Transcendental Meditation technique.

Dr. Leffler maintains a comprehensive list of Invincible Defense Technology links, including a link to his 177-page doctoral dissertation for his Ph.D. in Consciousness-Based Military Defense. In 2008, he received the Maharishi Award for his pioneering work in Invincible Defense Technology. Contact information for Dr. David Leffler is available at: http://davidleffler.com/contact-us