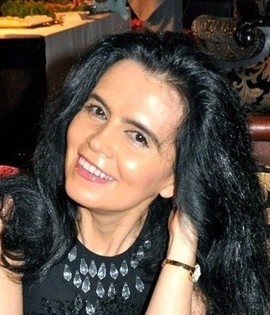 Teresa Studzinski holds an MA from Jagiellonian University, Krakow, Poland. She completed the Netherlands Management Cooperation Program organized in cooperation between the Ministry of Foreign Affairs, the Ministry of Economic Affairs, and the General Employers Federation in the Netherlands, aimed to assist industry and transfer top management skills. Ms. Studzinski is a Co-Founder and President of The Global Alliance for Preventive Wings in the Military.

Prior to that she was Director General of the international media syndicate Hollywood Stars & Saga, New York, owned by Sam Summerlin, former director of The New York Times international syndicated operations. Before that she served as the European representative for Public Broadcast Marketing (PBM) in New York, and earlier as the head of international relations for Media Corporation-Jozef Wegrzyn in Warsaw, Poland. She is a member of both the National Press Club in Washington, DC. and the Foreign Press Association in New York. Since 1991 she has been a certified teacher of Transcendental Meditation technique, and became an expert in training IDT (Invincible Defense Technology) groups.

In 1990, invited to the University of Warsaw presentation, Teresa met a group of leading world scientists who pioneered the research on Invincible Defense Technology - Maharishi Effect ( reduced societal stress brought about by the TM and TM-Sidhi program): Dr.Susan and Michael Dillbeck, Dr. Robert Keith Wallace, Dr. Bevan Morris, Dr. John Hagelin. On Teresa's invitation the delegation came to Krakow and did the Jagiellonian University main auditorium presentation, at the University of Krakow. The visit was a great success. Meeting the scientists was an inspiration for founding the GAPWM later in life, whose goal is to promote Invincible Defense Technology and the profound body of science behind it, for stable peace and sustained economic development for all.

Teresa was granted special awards in 1986 and 1992 by Pope John Paul II for her contributions towards creating democracy in Poland.