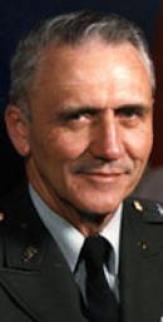 Retired three star U.S. Army General.  Former Director - Command, Control, and Communications, the Joint Chiefs of Staff, US. He is the author of From Pigeons to Tweets: A General Who Led Dramatic Changes in Military Communications.

Lt. Gen. Clarence E. McKnight, Jr., (U.S. Army Ret.) graduated from West Point in 1952. He served in the Korean War and commanded two Signal Battalions in Vietnam. He commanded three Signal Battalions in Europe, including commander, 5th Signal Command/deputy chief of staff for communications-electronics, U.S. Army Europe. He served as commandant of the U.S. Army Signal Center and School, and commander, U.S. Communications Command. He served tours of  Ft. Gordon, Georgia, and Ft. Huachuca, Arizona, and concluded his career as Director of Command, Control and Communications Systems for the Joint Chiefs of Staff in Washington, D.C.